by David Coombs in Court-Martial Information 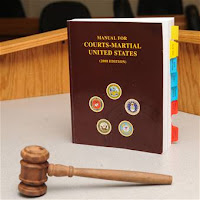 Prosecutorial Discretion: In civilian communities, police and prosecutors exercise discretion in deciding whether an offense should be charged and offenders punished. In the military, commanders make this decision. Once the investigation is complete, the commander must make a decision about how to dispose of the case. Throughout the investigation, the commander has a lawyer (judge advocate) available to assist and provide advice. With the assistance of his lawyer, the commander decides whether a case will be resolved administratively, through a nonjudicial punishment action under Article 15, UCMJ, or referred to trial, and what the charges will be. The disposition decision is one of the most important and difficult decisions facing a commander. Each commander in the chain of command has independent, yet overlapping discretion to dispose of offenses within the limits of the officer’s authority. The commander at the lowest level makes the initial decision regarding disposition. Under the Uniform Code of Military Justice (UCMJ), superior commanders may not seek to improperly influence the subordinate commander’s exercise of independent judgment or disciplinary action. However, nothing prevents a superior commander from withholding authority to himself or herself to dispose of offenses in individual cases or types of cases (e.g., officers, senior NCOs, drug cases, DUI).

Commander’s Range Of Options: The commander has a number of options available for the resolution of disciplinary problems. Briefly summarized, they are as follows:

1. The commander may choose to take no action. While this may seem to be unusual, the circumstances surrounding an event actually may warrant that no adverse action be taken. The preliminary inquiry might indicate that the accused is innocent of the crime, which the only evidence is inadmissible, or the commander may decide that other valid reasons exist not to prosecute. A subordinate commander’s decision not to take action is not binding on a superior commander’s independent authority to take action.

Preferral Process: Charges are preferred (formally initiated) when the accuser, under oath, signs them before a commissioned officer of the armed forces authorized to administer oaths. The accuser must also state that he has personal knowledge or has investigated the matters set forth therein and believes they are true in fact to the best of his or her knowledge and belief. When an immediate commander acts as accuser, the commander may rely on the information developed in an investigative report.

Contact the Law Offices of David E. Coombs for a free legal consultation:

Send Us a Message